If you’re like me, your harmonium is one of the most important items you own. It’s a source of joy, love, music, connection and so much more. Have you ever considered what you’d do if it were lost or stone? An ounce of prevention is worth a pound of cure, and I do have a trick that could be a life-saver if your harmonium is ever stolen, as mine was in November 2019. Below are two stories. One is a cautionary tale. The other has a happy ending. Please take the action I suggest below so that if the worst case scenario arises you have a decent shot at a happy ending. 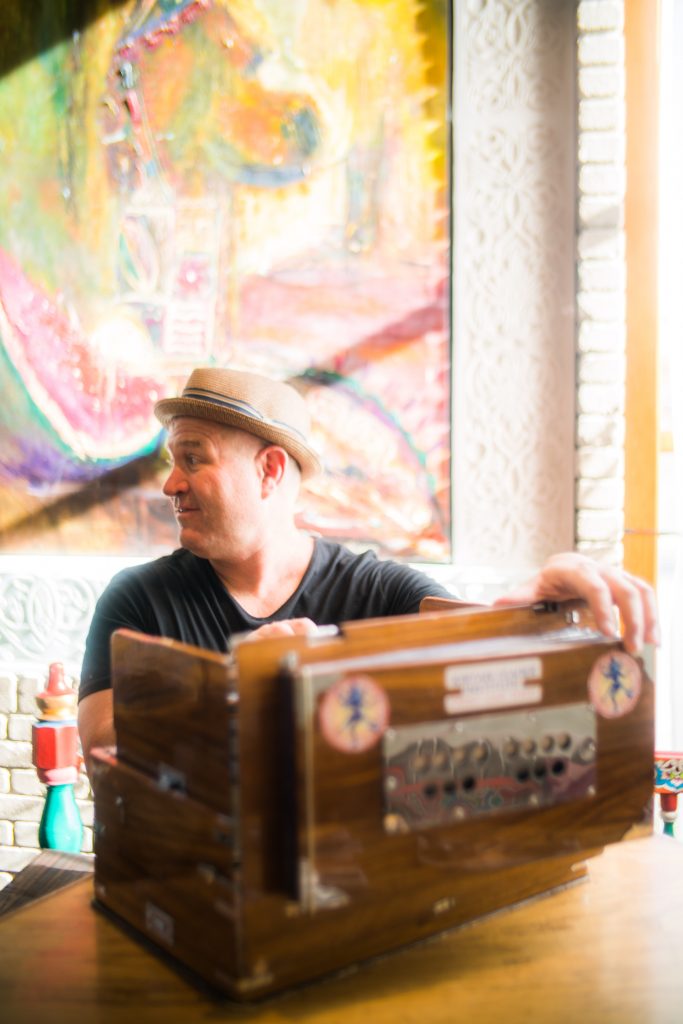 Have you seen this harmonium?

One Friday evening this November I stopped for Thai food in Oakland, CA at 7pm. I parked on a main street, in front of a restaurant where I’d eaten before. After a delicious meal I returned to my rental car and was shocked to discover thieves had smashed the tinted rear window and stole the only thing in the car- my Bhava Mini harmonium (pictured above). I suspect the thief decided the instrument was of no value, and may have abandoned it. Alas, my harmonium case possessed no business card or other form of identification  so there’s not much of a chance I’ll get it back. Many of you learn things from me that I do well. This is an opportunity to learn from my mistake.

Here’s a similar story with a happy ending. In 2013 KLI community member Tim Jordan (pictured above) was on his way to the airport for our Professional Kirtan Leader intensive when he briefly stopped to meet a friend. Tim parked on a side street near a park in West LA, leaving his harmonium in the back seat. An hour later he jumped back into his car and headed to the airport. As he entered the highway Tim felt a draft coming from the rear passenger window. When he pulled over to roll up the window he was crestfallen to discover the window was smashed and his harmonium was missing.

Tim received a voice message from a complete stranger on day two of our intensive. A Good Samaritan said “I found a ‘box’ in park, and your business card was in the case. Give me a call if you want it back.”

The following week Tim drove to this gentleman’s home in West LA. Tim was relieved to discover the harmonium was still in good working order. He assumed the person who stole his  instrument had no idea what they were taking. They likely opened the case in the park, decided it was of no value, and abandoned it. Luckily (and wisely) Tim had placed a business card in his harmonium case, which allowed his precious instrument to find it’s way back home.

Please be wise like Tim. Take a minute right now to put a business card (with all your contact info) in any harmonium cases you use. In the rare (and unfortunate) case your beloved instrument is stolen you will have a shot at getting it back (a la Tim Jordan) and won’t lose your instrument forever as I did.

Buy a Harmonium, Not a Headache