Mike Cohen, MA, founder of Kirtan Leader Institute, loves working with those who feel called to share Kirtan with others, and who possess big ambitions around personal development and contribution through Kirtan. Mike has trained and apprenticed hundreds of Kirtan Leaders, from total beginners to students he helped create and release full length Kirtan albums. In 2016 alone, Mike worked with 150 students through his Kirtan Leader Institute, helping them build the skill and confidence required to chant at home and serve others through sacred chant. Mike guides his students to build thriving chant communities, lead with power and grace, write original chants, tour, play at festivals, create albums and, along the way, transform who they are being in the world.

Your learning experience with Mike is informed by his extensive background and training in Western and Indian music, Somatics, Integral, Ontology, Enneagram, Embodied Leadership and Dattatreya Spirituality.

Mike released critically acclaimed albums in 2009 (Om Dattatreya),  2012 (Soul Contact) and 2016 (Illumination: Soundtrack for the Satya Yuga). These three full-length Kirtan albums blend Eastern mantra and Western grooves in an intoxicating manner that is ‘inspiring, addictive and highly-chantable.” (Yoga Chicago Magazine). For over a decade he has shared Kirtan across North America, offering accessible and potent Kirtan events in yoga studios, healing centers and at yoga/chant festivals. Mike was honored to lead Kirtan immediately before the legendary Krishna Das at 2015 Bhakti Fest Midwest. His fall 2015 West Coast tour shared 30+ events from Seattle to LA – and all points between. 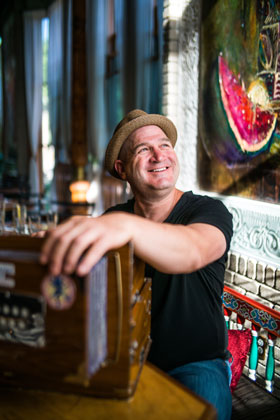 Your learning is informed by Mike’s knowledge of:

Kirtan generates happiness. Kirtan quickly calms your mind, opens your heart, drops you into your body and illuminates a profound connection to yourself, others and the Divine. A fun and accessible social practice, Kirtan is sacred call and response chanting from the Indian yoga tradition that requires no prior experience.

Kirtan is a participatory social practice that blends East and West. The leader chants (calls) and the audience responds (response). It’s that simple. And yet, very potent. Just a few minutes of practice can generate the experiences described above. Eastern spirituality is represented by Sanskrit mantras from India that dutifully and reliably connect with you Divine energy. The music which carries these mantras (ancient words that carry an energetic force) is frequently familiar to Western ears, with influences from jazz, funk, soul, rhythm and blues, and rock music.

At its highest, Kirtan becomes a form of collective spirituality where each participant serves the group, bringing Love, Freedom and Healing into each person’s life.

Kirtan with Mike Cohen is an invitation to chant, clap, meditate and dance together to cultivate deep connection and powerful experiences of Collective Spirituality.

A lifetime of experience leads me to conclude that learning happens best and fastest within a learning community. Such a community is a gathering of practitioners with similar intentions (leading Kirtan) by someone who possesses expertise in a proven methodology. This leader holds space for practitioners who practice together and individually, step into and reflect on their practice and receive individualized coaching. Since 2010 I have convened and held multiple learning communities for both leaders and Kirtan Leaders.

Typically we start with building self-mastery through one-on-one coaching. With sufficient self-mastery, one is ready to create music with other musicians (i.e., drummer, response singer).

Ultimately, the path of Kirtan Leadership is a path of Self Mastery. Deep work in the domains of Musicianship, Leadership, Community Building and Spirituality allows transformation to take place. The lives of participants in this learning community unfold as they develop, producing Kirtan Leaders who are successful in the world, deep in their spirituality and skilled at serving others through this potent spiritual practice.

If one of the available dates and times does not work for you, please e-mail Mike.